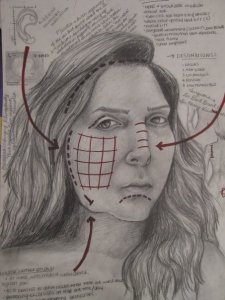 Since my last post, I decided I wanted to start bringing in a more personal side of myself to this blog. Since that decision, I have had a hard time deciding how to do it. It involves somewhat unique experiences that have permeated so many areas of my life that choosing where or how to start has been overwhelming. But I have to start somewhere so I’ll start with the toughest part. I’ll begin with the people that made me, my parents. The reason I want to talk publicly about them is because we all have complex relationships with our parents, and that’s okay. Mine has been somewhat unique in that it has in part been based on my own circumstances of having been born with facial deformities. I want to share some of that relationship because the experiences I’ve had of being born that way, are not only mine, but theirs as well. I bring them into this, not only as a way of sharing with you my experiences under the knife, but as a way of expressing that I know my struggles are not my own and that they are constantly there with me.

After having been going to therapy in NY for a while, my parents started questioning the reasons behind it. They questioned the effectiveness since I’d been going for a couple of years and saw no end. In order to ease them on the idea, I invited my mother to come along with me to a session in one of her trips to NY. After having struggled to explain why it was a good thing I was going, my mother confessed something during our session that changed everything for me. She said “We’ve actually been waiting for it.” Meaning, she and my father had been waiting for the day my experiences under the knife would get to me. This not only made me cry, it calmed me.

My mother went on to explain to my therapist that when I was born, my mother told my father that they were going to do anything and everything they had to do to make me feel as normal as possible. That turned into over a dozen of reconstructive surgeries (I don’t actually remember the number now) from ages 5 to 20, travelling miles within the US, meeting some of the US’s most important doctors, weeks or months away from school, having had my mouth wired shut for two months, looking funny with weird apparatuses on my head, awkward interactions with curious strangers, and a lot of confusion about myself. I’ll be honest about something; there was also a lot of anger. Mostly towards my parents.

When I was younger I saw them as the culprit for my experiences. I blamed them not only for who I was but what was, as I saw it, being done to me. We now laugh at some of my childhood behaviour. We talk about how I would hide my mother’s keys to make her late for work or how I would say I hated green eyes (she has green eyes). But by the time I started opening up to my therapist in NY about my experiences in the surgical room, I also began talking about it a little more with my parents. When I was depressed, they were to blame, but when I felt better, they were and are my heroes.

I was often angered by the idea that they wouldn’t let me feel bad about myself. They were there and were supposed to be the ones to understand. But also, they were there. It hadn’t occurred to me how scary it was for them. Of the few memories I have (I’ve blocked out a lot), one of the more intense ones is having woken up from surgery, confused, not being able to move or properly see, and having my father shakenly hold my hand while we both sobbed. Another one is them attempting to blindly screw in a surgical screw in my jaw while a laid on their lap in pain. Another is them watching me frantically squish a fry into my wired-shut mouth out of frustration and hunger. By my twenties these were not my memories anymore but theirs. Mine now involve my experiences with having low self-esteem which continue to affect my everyday behaviour, theirs are the actual events that happened to me. I had dismissed this part.

I often become so self involved in my problems that I dismiss the reasons why they can’t deal with that fact that I have had problems. They dedicated so much of their money, time, and sanity to making me feel as beautiful and normal as possible that I can now understand their struggle. I could say that I am now happy and grateful but it’s still complicated. What I can say is that this journey of mine has made me think twice about how I deal with my situation. Yes, it happened to ME. But it also happened to them. And that is a complex relationship. For more that I have wanted them to accept everything I feel, I also have to accept what they feel. That has been the biggest lesson of having my face. When I started going to therapy, I was angered at the fact that after a while they started disapproving of it. My parents struggle to understand why I have had issues accepting myself but having had that session with my mother made me realize that they struggled too. At 24 I finally got to hear a little bit of their side of the story. It wasn’t easy either. The year after, I found myself rebelling in different ways and, I can now begrudgingly admit, attempting to get their attention through it. It made me feel petty and childish but it was based on this complex relationship I reference. It’s weird to look back at my behaviour and feelings in the past and admit to myself that much of it depended on my relationship to my parents. But this is because what happened to me also happened to them.

Some days I still struggle with myself. But that’s okay too; it’s been a long journey. But I also have to accept that the reason my parent’s struggle with this is because they love me that much. It’s been a journey of accepting that they did everything they could in order to see me be as happy as I can possibly be, while accepting that it came with a price. My parents are my heroes because they make no excuses (I have plenty for us all). While it was difficult for them to put me through the ordeal of surgery, they did it because they love me, period.

Most people in my life don’t know this side of my story. But it is the most important one. I’ve always made it about my emotional struggles and the mistakes I’ve made. But that is for me to overcome. The important part is that I can now step back a bit more everyday and see my experiences as shared experiences. It is not only about me, but about everyone that was with me during those experiences, particularly my parents. I haven’t made it easy on them and that is a fact they’ll appreciate me admitting. Unfortunately it was because they love me that much. I needed someone to blame and so I blamed the people that were there. The people that held my hand. The people that played with me in hotel rooms and called me beautiful. I needed to blame someone and so I blamed the people closest to me. For that I will always be sorry. But it was also because I love them that much.

I like writing about socio-political issues. I do it both in Spanish and English, depending on my aim, context, and general mood. View all posts by subed924

11 thoughts on “Our Face: My Parents and Me”